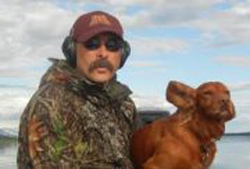 Mitch Seavey will  soon be the first team into Unalakleet, followed shortly by Aaron Burmeister.    At  least two teams a few miles back on  the trail stopped for a couple hours,  and  the two front runners didn’t.  Aliy Zirkle  and Joar Ulsom each could go through   Unalakleet with just a short stop.   Because  of these staggered rest periods, it is difficult to say who has the advantage now.  There are a number of other teams within 20 miles of the lead, very close for this stage of the race.

John Baker has moved up steadily and now the tracker shows him in 12th position, his highest for the race.  Right now he is in good position for another top ten finish if all goes well.   Including his rookie year in 1996, John has finished out of the top ten four times, racing every year.  While every racer would like to win every year, all of the top contenders agree that a top ten finish is a realistic  goal for a contending team every year.

The order arriving in  Shaktoolik,  the next  check point after  Unalakleet,  will give a much clearer picture of who is still in the running.

The Sloggy Commute on the Portage by Sam Towarak 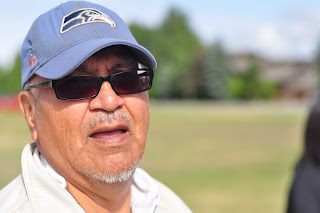 As I write this blog (Sun morn, 745am), Aaron Burmeister and Mitch Seavey are neck and neck to win the First to the Coast award just having left the Chirosky River and hitting the Snowmachine heaven highway (faster than prior to Chirosky as they are on a well used ice trout fishing route). is a surprise and not a surprise for the position he is in. Everyone was impressed with Mitch’s post 24 hour run to the Yukon which is the not surprised crowd. The surprised crowd had heard that the energy expended to the Yukon was enough to slow him on the Yukon but that didn’t materialize.

What happened on the Yukon? Well a day before the mushers traversed the Eagle Island to Kaltag run, some snowmachiners from Kaltag brought the much needed food drops to Eagle Island. Their comment upon returning to Kaltag was that “whoever swims across the overflow on the Yukon is going to win the race”. So the mushers most affected by that episode spent more time resting and trying to get their dogs to rebound from the run on the Yukon. 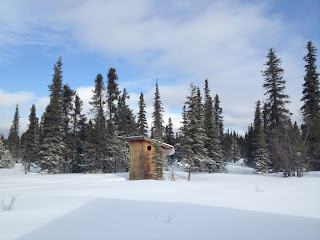 Teams took longer than expected resting in Kaltag. We went up to Old Woman cabin & Tripod Flats cabin to meet the mushers. It was a blue sky kinda day and beautiful country. We spent some time at the first cabin setting up heat for the cabin and clearing the snow from the front entrance. We made a vain attempt to repair the BLM lamps but were unsuccessful as both lamps were inoperable. BLM does a good job in stocking the cabin so that a person caught in cold weather will be able to survive. Well one of the needed survival operations for the cabins was to clear the path to the outhouse and we did that at both cabins. The Tripod cabin was body length in depth and 40 feet in length so there should to some happy mushers to visit the half moon door.

Oh the race. The trail was reported to be punchy but groomed from Kaltag to Tripod to Old Woman. Some energy would be expended and dogs needing tender love and care needing some rest are taking it at Old Womaan cabin. Three mushers, Martin Buser, Jake Berkowitz and the Norwegian all stopped at the cabin this morning. That strategy may not backfire if any of the three decide to pick up their food bags and straw and head towards Shaktoolik where there is another cabin just before the Foothill drop to the Shaktoolik flats. That cabin is important as there has been many a person who falter on the Skk flat during bad weather. This strategy would work even better if the musher leaving from that cabin bypass Shaktoolik and head towards Norton Bay where there is a less stocked cabin at the entrance to Norton Bay. You ask if anyone has tried this and its has been only thought of by past mushers like Charlie Boulding.

There is very little overflow on the Portage trail, but temperatures during the day makes it a hot run. Thus explains also the long rest needed. I feel Martin Buser has banked his rest for one more strategic move or he is trying to maintain the speed of the team (usual answer to the media). He still remains a contender to the two mushers ahead of him.

Finally John has left Kaltag and 1:30am which would put him into Unalakleet around the noon hour and after if he makes one steady run from Kaltag.